From DDO wiki
(Redirected from Altar of Epic Rituals)
Jump to: navigation, search

Select named items can be upgraded into powerful Epic versions by collecting rare scrolls, seals, and shards. These Epic rewards can then be further customized with Augment Crystals, permanently adding new effects to your items.

The Altar of Epic Rituals allows upgrading of various items into Epic or more powerful versions via Epic Crafting. It is located in the enclave of The Twelve, just southwest of the tower itself. It can be reached by taking a path in that direction at the tower-end of the bridge.

Besides upgrading Epic named items, this is also the location to create The Master's Gift.

All epic items created are minimum level 20, and most are Bound to Character

For example, if you want an Epic Antique Greataxe, you'll need to farm the appropriate quest for...

Once you have all of those, you can create the Epic version of the item.

Scrolls drop from monsters in the same quest where you find the item. When a scroll drops, it is randomly assigned to a party memberU8. Scrolls are not bound, and can be freely traded, so you may also find one on the Auction House or Astral Shard Exchange.

Depending on the quest, Seals may drop from one or all chests in a quest/raid. For Example: All the chests in Epic Chamber of Raiyum will have a chance to drop Seals, but Epic Partycrashers will only drop seals in the final "Epic chest".

Shards are only from end chests, or (in some cases) from the end-chest to a chain, e.g. Web of Chaos items. Check the epic item(s) you are seeking to make sure you're looking in the right place.

Both Seals and Shards become Bound to Account upon acquire. These items may only be traded* via the chest loot window, before claiming items from that chest. Scrolls, Seals, and Shards stack and count as "Ingredients", so may end up in a green ingredients bag.

(* To "trade" a "Bound to Account/Character" item that you find in a chest, do not loot it - right-click the item as listed in the chest and select the party member you wish to assign it to. They must then loot the chest for that item, as normal.)

Note that when "upgrading" to an Epic version, the Heroic version is actually destroyed in the process and a new Epic item created. This has multiple implications: 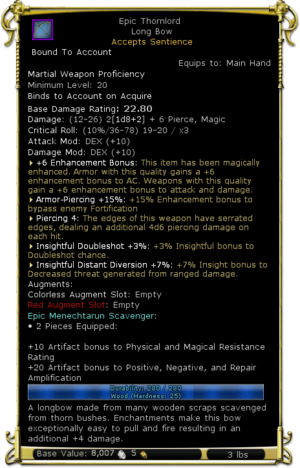 Most epic items have at least one Augment Slot.

Note: As of Update 17, the old Augment system for epic items was replaced with the new Augment Slot system. However, existing epic slotted items and crystals are unchanged. See Epic Crafting/Augment Crystal Table for old version costs and effects.

If you want to clear any Augment Slots that are filled, you can use the Cleansing Ritual. This is also the process you'll want to use if you have an old version that you want to upgrade to an updated version. 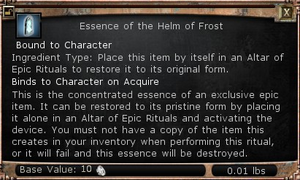 Essence of the Helm of Frost

As of U18.1, these recipes are still missing.