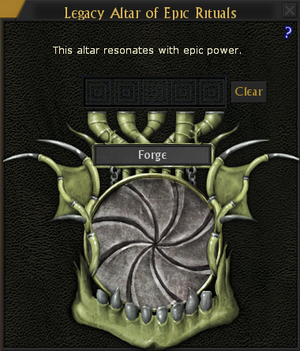 Legacy Altar of Epic Rituals is a crafting device introduced in Update 50. Epic Crafting was revamped in this release; modern items are now created using Altar of Epic Rituals. The legacy altar allows you to create the old versions of the items from old ingredients (seal, shard, scroll). However, some of its recipes are still useful.

The altar is located in the Twelve, walk past Lahar, past 2 other altars, down to the lava. Approaching Lahar from the Marketplace, it is down and to the left.

Item conversion at the altar deletes the heroic item and creates an epic version from scratch. The following item upgrades are lost: