The Refuge of the Ancestors is the only part of the Raveneye village that has withstood the sahuagin attacks. 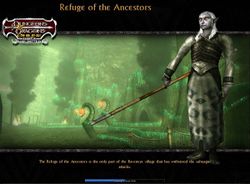 The sahuagin destroyed the Raveneye clan's village during their invasion of the Red Fens. One Raveneye clan elder, Viercha Ettervs, is making a brave and probably doomed last stand in the Refuge of the Ancestors.

Gullwing wants you to travel to the Refuge of the Ancestors in the northeast section of the swamp and save Viercha Ettervs.

Notes: You may have to kill some Drowned in the final wave to get Aggression