(Note: This does NOT mean it requires purchase of anything, you may play with free daily tokens.)

Lava Caves: Circles of Power is one of the challenges added in Update 12. 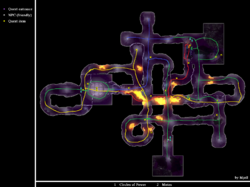 Countless crystal deposits can be found inside this vast network of blistering hot caves.

Note: You must complete the first star objective to receive experience & rewards from this Challenge.

None, however exploding purple crystals count as force traps, and the lava caves obviously feature lava, which can be a deadly obstacle sometimes.