Description: Toven was the head chief of the House Cannith Manufactury for a long time before he was substituted by Channa d'Cannith. The player characters get involved with him because of his plan to remove the sentience of every warforged in Stormreach, which, at the time, includes the Lord of Blades.

If you go to the eastmost corner of the enclave, and has not taken Blown to Bits, Schemes of the Enemy, or Power Play, you will see him discussing with Channa:

After you acquire at least one of those quests, he will disappear from the Enclave. After you complete The Master Artificer raid, however, he will be seen in chains in the place that used to be occupied by Sharpspur. Interacting with him will make he say:

Toven is captured by Cannith

In this area, there are four journals written by him.

In this area, there are eight journals written by him. 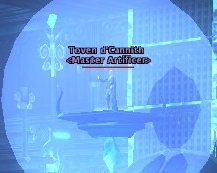 Description: Toven d'Cannith <Master Artificer> is the raid boss of the The Master Artificer raid introduced in Update 11. You first meet him via the internal communication devices of the workshop, and later is allowed to directly question him, via a hologram communicator.

Ghost of a Chance (epic)[edit]

Toven is the responsible to sell Magefire Cannons to Major Mal.