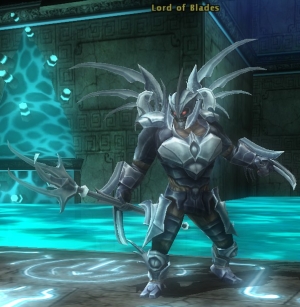 The Lord of Blades has a huge variety of devastating special abilities. Some are only gained when he reaches various health percentage marks which keeps the battle interesting. 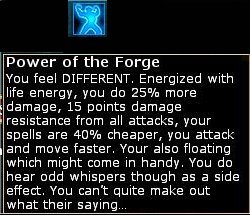 Player version of Power of the Forge

After the backspin, he will perform a very powerful slam attack, this effect will also knock back several feet anyone he hits (it should only be the tank). The slam attacks deals massive slashing damage. Base damage is  ♦317+5d20Normal ♥317+6d20Hard ♠317+7d20Elite ●322+8d20Epic, again increased by Power of the Forge.

Once all these waves are defeated they will not respawn and the final phase will be triggered.

Final Phase and How to complete the raid (5% to completion)

A short time after this phase begins a portal will appear in the center of the platform and several waves of Quori monsters will begin to spawn and attack you.

The Lord of Blades cannot be directly defeated, as the Power of the Forge will be back to prevent him from dying (the amount of health he regains after being reduced to zero varies with difficulty). You can choose to "Mark" him - reduce him to zero health up to three times to complete optional objectives - or simply go for completion by destroying the newly attackable set of pillars. Once you destroy the pillars, the raid will be complete and the Lord of Blades will depart regardless of his current health. Not all pillars will need to be destroyed, as the last two remaining will fall on their own once the rest are destroyed.

The waves of quori do eventually stop spawning, but they are fairly tedious to kill and can be dangerous. Groups do sometimes choose to kill all the quori first when marking, but it's more common for someone to be assigned to kite the quori while the rest of the group focuses on the Lord of Blades or the pillars.