From DDO wiki
(Redirected from Dwarves)
Jump to: navigation, search

Dwarves are known for their skill in warfare, their ability to withstand physical and magical punishment and their hard work.

There is one dragonmark carried by Dwarves - Mark of Warding, carried by House Kundarak. 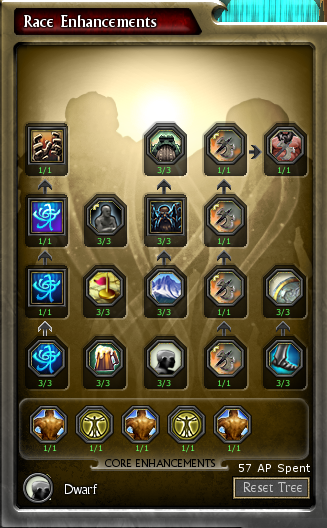 Dwarves typically stand about 4 1/2 feet tall, but tend to be so broad, compact, and muscled, that they weigh nearly as much as a human. Skin colors range from deep tan to light brown, and eye colors are typically dark browns. Hair is usually black or brown, graying as they age. Male dwarves tend to also place great value in the appearance and grooming of their beards. Dwarves are considered adults about the age of 40, and often live into their fourth century.

The traditional dwarven lands are the Mror Holds, in the Northeastern most portion of what used to be Karrnath.

Some consider dwarves to have originally come from Frostfell (the snowbound continent at the north pole of Eberron) and migrated to Khorvaire sometime about 12,000 years ago (-11,000YK). Some dwarves are still to be found in Frostfell, going by the name of "Toldun Nordothak", or "Those who stayed".

Other clans claim that Dwarves sprung up from the soil of Eberron, created in ancient times to fight the aberrations of Khyber.

The Dwarves of Mror are typically organized into clans, with each clan claiming its own land, creating its own customs, and building its own holds. Traditionally the clans have a bloody history of fighting amongst themselves, and even today there are minor fights between them, but most of the fighting is done via political and economic maneuvering, with the occasional assassination.

During the Last War, the Mror holds claimed independence and formed their own country in 914 YK. At that time, the clans came together and formed a body called the "Iron Council", made of up representatives of each clan, which acts as a unified body for the dwarves. However the clans still rule within their own holds and often make their own contracts with outside interests.

There are currently 12 major dwarven clans in Mror:

Mroranon - The largest and most powerful. It has some of the best quality iron mines. It has feuds with Kolkaran (who rivils its mines), Soranath (an old feud between clan founders), Toldorath and Tordannon (who lobby to give a local orc clan full Mror clan rights).

Doldarun - Very wealthy with gold and silver mines in addition to adamantium and mithral mines. It is very involved in foreign affairs, but seeks to remain neutral amongst the clans with no current feuds.

Droranath - Has one of the poorest mineral resources. It often focuses on old traditions, creating many barbarian and fighter mercenaries, known throughout Khorvaire for their skills. Its constant skirmishes with the Jhorash'tar orcs causes feuds with the Toldorath and Tordannon clans.

Kolkarun - Are entrepreneurs and opportunists. Their feuds and alliances shift regularly. Currently it has alliances with Aundair, Karrnath, Zilargo, Talenta, the Emerald Claw, Mroranon, and Soldarak. It feuds with Doldarun.

Kundarak - Clan Kundarak is now often known as House Kundarak, a dragon marked house. It holds no position on the Iron Council, claiming neutrality as a dragonmarked house. But, it still has a lot of unofficial power.

Laranak / Londurak - Their one claim to fame is their legendary feud with each other. It was only through gifts, alliances, and political pressure where these two clans reluctantly convinced to join the Iron Council together.

Narathunhold - Contains several gemstone mines, and its jewelers are the best in the world. They often work with other clans to do the jewel work when items of great value are being crafted (ceremonial weapons, jewelry, crowns, etc.). It feuds with Droranath (who they claim reneged on a business deal) and the Toldannon and Toldoroath (who they claimed robbed them).

Noldrun - This clan disappeared 400 years ago. No one is exactly sure what happened to them. Their lands are often considered haunted and are avoided.

Soldorak - This is a very wealthy clan, and often uses its wealth and business deals to undercut the other clans, especially Kundarak. As such, most other clans often oppose Soldorak, the exception being Soranath who works with them to find markets for their goods.

Soranath - Have some of the best craftsmen of all the clans, and are often the buyers of the other clans raw materials. The other clans resent, but respect Soranath's skills. Only Mroranth feuds with them (ancient disagreement between clan founders).

Toldorath / Tordannon - These clans are long time allies. They also seek to grant the Jhorash'tar orc clan full clan status, but few other dwarf clans agree to this.

There is only one dragonmark carried by Dwarves - The Mark of Warding, carried by House Kundarak.

Dwarves speak dwarven amongst themselves, but many do know other languages - especially the languages of those they trade with. Although, when speaking to outsiders dwarves usually appear stoic and reserved - being careful to not say anything to give away any information that could be used against them.

Dwarves respect hard work, material wealth, and the ability to haggle. Showing ones wealth is often a way of proving the success and power you and your family or clan have.

Dwarves also have a love of fine objects that is often mistaken by other races as greed. When a dwarf beholds a finely crafted object, they do not desire just for the wealth it represents, but from a true appreciation for the work and skill that went into the crafting of that object.

Fashion amongst the dwarves is a riot of colors. Dwarves will often spend more money on clothing, jewelry, weapons, and armor than they will on their homes. The former items being what people will see daily. Armor is often enameled or lacquered, and covered in complex engraving. Weapons are also often gilded, painted, colored, and engraved. Jewelry is often not only a display of wealth, but also a display of clan rank, military honors, civic offices, etc.

Because of the value put on their weapons and armor, dwarves will often name their weapons or shields. And during the telling of battle stories it may be hard to distinguish whether they are talking about their shield, or a companion standing beside them.