Trade is Stormreach's life-blood. With its harbor blockaded the city does not have enough supplies to hold out against a Droaam army. 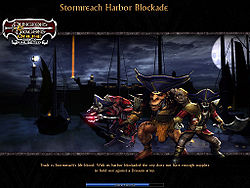 The Coin Lord Graden Wylkes told you that the Droaam navy has mined Stormreach Harbor. Wylkes wants you to destroy the Droaam's minelaying ships.

It is possible to sneak around in all three ships, without raising any alarm: Sneaking Around in Blockade Buster