Summerfield is one of Stormreach's outlying districts. Droaam's army is trying to break through its crumbling walls and lightly defended gate. 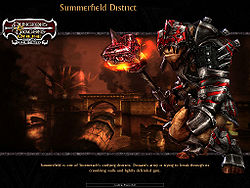 Droaam army is attacking the walls of Stormreach. The city's defenders are holding their own, but nothing has been heard from the Summerfield district for some time.

Coin Lord Yorrick Amanatu wants you to go to the Summerfield district and defend the walls. You can reach Summerfield via Lordsmarch Plaza, by going up the stairs leading from the northern alcove there.

Once inside the quest, go right, up the ramp to the upper walkways, and find and speak with Captain Markus there.