Delera's Tomb is a graveyard, city zone accessible from House Jorasco, containing various quests and a story arc within. This adventure pack does not have a Wilderness adventure area; although, the public area has been used in a similar fashion during The Night Revels event and its predecessor Mabar Endless Night Festival.

You must complete the first three quests of Delera's Tomb in order to begin the following story arc Return to Delera's Tomb. For details to start the second story arc see Free Delera. The quests involved are:

Because Thrall of the Necromancer is a base Level 8 quest, a character must be minimum Level 5 to enter (and thus finish the story arc for end-reward).

Other quests located within the zone[edit]

As of Update 7, Delera's Graveyard has become a public area where Free to Play characters can visit or play without charge. The change allowed all players access to the Mabar Endless Night Festival live event.

However, Free to Play players who have not purchased the Delera's Tomb adventure pack cannot play the quests that reside in the graveyard.

Update 7's adjustment to a public area re-oriented the tomb entrance and NPC of the final quest, Thrall of the Necromancer.

The following became obsolete info after update 45.1. there is no end reward list anymore. Items listed may drop in chests during the chains quests at an unspecified rate. 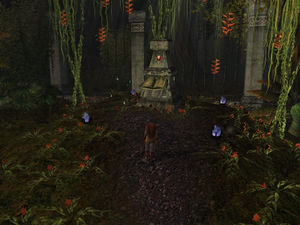 Gary Gygax, co-creator of original Dungeons and Dragons (Wikipedia article), passed away March 2008. A memorial site has been erected in game in this zone, with Module 7

During the quest there is a low-power named weapon that you can accept from Colam Mersein, the Club of the Holy Flame.

Listed below are possible Named end rewards after finishing Thrall of the Necromancer, which you can claim when you return to Delera (same quest location as Free Delera, back up the hill, on the right). The list can also include medium-level clickies and older (read: "weaker") random-generated items. It should be noted that if you have completed the chain on heroic but not taken the end reward, you can get the epic Voice of the Master by entering Return to Delara's Tomb in epic. (Update 45).

NOTE: Named items that can appear on this quest arc's end reward list will have a 100% chance of appearing on every third completion of the story arc.