Dragontouched Armor, originally introduced in Module 8 is a form of Crafting based on Runes found in the Reaver's Refuge quests and adventure areas. The Armor is very customizable by applying different types of runes to it giving 19,800 possible armor combinations!

A complete Dragontouched Armor is crafted from:

Each rune gives the armor a different power, and the armor can have one of each rune. Armor blanks are purchased with Draconic runes. All four types of rune drop as rewards in the Reaver's Refuge quests. Eldritch runes can also be bought with Draconic runes, and can be upgraded to Tempest and Sovereign runes.

(Editorial comment: This pack and crafting system came out quite a while ago, in late '08. Since then, these items have become (mostly?) obsolete, having been surpassed by more powerful and customizable options. But feel free to take a look and decide for yourself!) 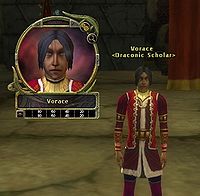 Step 1: You need 50 Draconic Runes to buy Dragontouched Armor. They can also be used for other purchases as shown below. You must have completed Stealer of Souls to spend Draconic Runes.

Where to get Draconic Runes:

TIP: When you're ready to run Stealer of Souls for the second or subsequent times, Vorace sells the essences needed to flag for the quest. For the following number of Draconic Runes, he'll provide:

Remember, he'll only talk to you once you've completed Stealer of Souls once.

Step 2: Talk to Vorace, he's across from the Stormreaver in Reaver's Refuge (across the bridge, in the room with the mailbox and crafting devices). Vorace will give you your choice of Dragontouched Armor (as listed below) in exchange for 50 Draconic Runes.

Step 3: You'll want to obtain "upgrade" runes to apply to your new armor.

Where to Get Upgrade Runes:

Note 2: As of Update 7, you can shatter your undesired Sovereign Rune back to 1-9 Eldritch Runes. Place one Sovereign Rune and one Draconic Rune in the Dragontouched Sovereign Altar; both runes will be consumed, and you will receive the new rune(s). All runes you receive back will convert up: i.e. if you receive 5 you will get 1 tempest and 2 eldritch runes. If you receive 9 you will actually get a sovereign rune back. There may be exceptions, see below**

Step 4: Once you get these runes, go the place where Vorace is and there will be 3 altars: Eldritch, Tempest and Sovereign. Place your Dragontouched armor and a Rune in the proper altar and select "Forge". 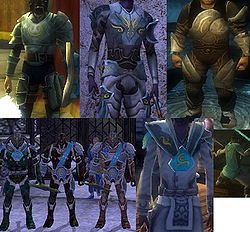 You can upgrade your suit of dragontouched armor with up to three properties, one from each of the three types of runes. As of Update 7 all types of runes are now identified in the chest, allowing you to swap with other people in the group for the rune you want. Formerly they were not identified and thus you could only find out a rune's property once applied to your armor. There are no tiers with dragontouched armor, you can use the runes in any order.