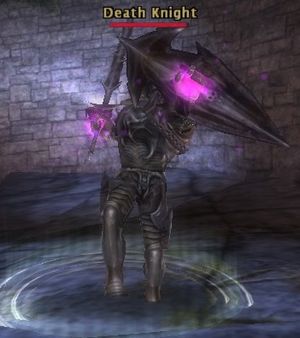 
Special Qualities: Immunity to Cold and Immunity to Electricity, Undead Traits* Can be stunned with Power Word Stun

Description: Death Knights are fairly tough Undead Human encountered in the The Lords of Dust and Servants of the Overlord. They appear very similar to the Black Guards encountered in Tempest's Spine, however they are a bit tougher (not squishy elves) and possess spellcasting (necromancy).