The Plane of Nightmares gains power from mortal dreams. Its denizens have long sought to control mortals directly, in order to force them into the same dream and become unimaginably powerful. 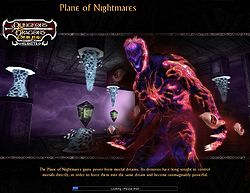 Channa d'Cannith has repaired the Stormreaver's Interdiction Lens for you. But, it needs energy from a Dreamforge to activate, which can only be found on the Plane of Nightmares.

To reach the Plane of Nightmares, you will need to go to the Stormreaver's Temple on the Isle of Forgotten Dreams, and drink from the Fountain of Dreams.

To enter this quest as a flagged character, you must complete Eye of the Titan, Reclaiming Memories and either the solo adventure Raiding the Giants' Vault or Mining for Ancient Secrets.

Not a 'trap', but the area after the arena has alternating high and low gravity. Stand under the lowest 'hanging' pillars to avoid being smashed into the ceiling. Killing the mobs here will end this effect.

If you are having trouble entering this quest ("The fountain of dreams is blocked."), stand on the first wall of the fountain and then face west with the yellow quest entrance swirl in front of you. If you continue to have difficulties, it might mean you need to reacquire the quest from Venge in The Isle of Forgotten Dreams.

A mandatory element of the quest consists of defeating enemies in each area until "light gravity" is announced. Once that happens, you can leap up to the next area with more enemies to clear, repeating the "light gravity" announcement for that area, and so on. You cannot bypass any of these enemies, as the jumps are impossible without the aid of Light Gravity.

After you reach the Theatre of Dreams and finish off the Quori within, any falls in your party will land them back in the arena. If you have, on your current life, defeated any of Sor'jek in Stealer of Souls, the Stormreaver in The Reaver's Fate, Queen Lailat in Zawabi's Revenge or Velah in the Plane of Night, the councillors will recognise you and their dialogue will change. Furthermore, the more of these targets you've slain, the more councillors will flee the platform before the remainder attack you; if you've killed all of them, only four councillors will be left.

After the Theatre of Dreams, 4 Councilors will ambush you on a platform. You must kill them to advance but they float out of melee range so ranged weapons or spells are mandatory. They will not move into melee range and their AOE spells will quickly kill any hirelings you have. However, if all else fails, you can jump off the platform to engage them briefly, and end up back in the Theatre to resurrect any hirelings and heal up to try again.

To farm for the Eardweller (Hard and Elite difficulties only), you need to either collect 3 keys or have good Open Lock skills, to pick locks. Use the 'Dream Market' portal from the first Rest shrine platform (for convenience). The Dream Market portal only appears in the 'Dream Garden' by the shrine after clearing the market mobs. The 'to Dream Market' portal just transports you to the southern area of the upper market. Make sure you boost your Jump skill, 25 is not enough to get the optionals.

In the final fight, the platform where the end boss appears creates forcefield barriers which prevent anyone from falling, leaving or entering.

The boss is the Devourer of Dreams, a Lawful Evil Outsider. He has Damage Reduction that's fully bypassed by Crystal + Good (need both, such as the unlocked Dreamspitter). He has fast regeneration, which is stopped for 6 seconds each time he is hit by Good-typed damage.

The Devourer has a high Spell Resistance (SR 39 on Normal) and throws Ability damaging spells that will eventually leave party members helpless without repeated Restoration castings or Cleric Radiant Burst. He also spawns Nightmare Swarms that prevent healing and damage weapons that hit them. The Swarms appear three times, when the Devourer is at 75%, 50% and 25% health.

The Devourer has a wide-area-of-effect stunning burst effect that can be countered by a "Light" Monk that continually buffs the party with Grasp the Earth Dragon.

It is very difficult to take on both the Devourer and the Nightmare Swarm when they are too close; separate the two and destroy the Swarm and then continue the take down of the Devourer.

Completion grants the party access to the Dreamforge crafting device on the same platform as the end fight. However, the forcefields remain in place, preventing you from switching to your alt characters to use the device.