This mine dates back to the ancient Giant empire. But the Path of Inspiration cult has recently sent miners into its depths, delving for some hidden treasure. 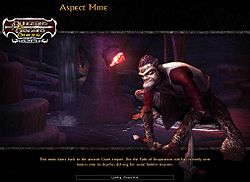 In order to repair the Stormreaver's Interdiction Lens, you will need to retrieve a piece of Aspect Crystal.

Velrath believes that the ancient giants mined this crystal from an Aspect Mine on the Isle of Forgotten Dreams.

To enter the final Dreaming Dark quest in this chain, you may choose to enter this adventure as a party, or run Raiding the Giants' Vault as a solo player to repair the Interdiction Lens to complete the third of three quest flags required.

The adventure is linear. Go south to find the crest, and then make your way back north and east to use the crest to enter the end fight.

Left (north from the first T-intersection) beyond a Secret door (Secret door DC) are some undead, a shrine and a chance at a rare skeleton mage.

As with other quests in this chain, the adventure is a relatively quick one. You enter a mine with many Inspired fighters and Clerics that try to stop you. Warpriests are nastiest and heal the allies often. The mine halls are narrow, so it is difficult for casters with lots of area-of-effect attacks to avoid attacks on the Wildmen slaves, who will attack you as well if provoked. For smaller parties that can pinpoint attacks and have no need for Conquest bonus, you might choose to leave the Wildmen alone.

The boss and several minions guard two Control Crystals that keep the Aspect Crystal there guarded by a force field. Slay the boss and destroy the crystals.

The Control Crystals have DR2/- and (as with many other crystals of their type) are more vulnerable to sonic and force damage. Don't destroy the Control Crystal without first engaging the end boss or you may not get credit for the crystal's destruction and will be unable to finish the quest.

The minions will respawn on destruction of the first crystal. Pick up the Aspect Crystal to complete the quest.

Once you have finished the quest, talk to Velrath for end-reward, and then speak to Channa d'Cannith and also Venge to advance to quest.