Eye of the Titan 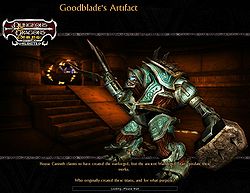 Gerald Goodblade claims that staring into the eyes of his artifact will bestow vision.

Goodblade's Artifact is on display at the Inspired Quarter's pier.

Notes: Conquest requires respawns during boss fight to be killed, and a rather slow boss kill.