This valley is shrouded with fog, almost as if long-dead spirits are trying to hide its secrets from the outside world. 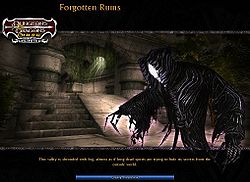 The Dreaming Dark are on their way to destroy an artifact the Stormreaver used against them eons ago.

If you are to stop them, you must find the artifact first in the Forgotten ruins at the Isle of Forgotten Dreams.

The cave you enter is actually the present-day version of the one you explored in the playback of the ancient Warforged Titan's memory in Eye of the Titan, but you start deeper in than the end of that quest, working backwards.

This is a relatively quick adventure with a high-DPS party.

Inspired Sorcerers and Wizards enjoy zapping you with death and level drain spells. Have Death Ward ideally, or a player that can pounce quickly on these enemies to immobilize and kill them. Similarly, slay the Clerics as they are very good at their job of healing their party and damaging you.

You may power-cast freely in this adventure. A shrine is available at the halfway point, just before you meet an undead giant and some skeletons he spawns before he attacks. The undead giant is orange-named and can be jaded to make a fight easier as he often knocks back melee attackers.

The final fight is a Quori Wraith that first sends some Dream creatures after you before taking you on itself. As with most Quori, beware of his stat-damaging attacks.

There is an optional, deeper into the cave from the end fight, in the ruins of the Warforged Titan armory (the start of Eye of the Titan). On entering the armory from the cave, head right and find a Titan inside an alcove for additional experience. You will encounter a little resistance on the way there.

The quest completes when any player picks up the shattered Interdiction Lens and the Usurper of Dreams has been killed.

After the quest, speak to Channa d'Cannith for reward, then to Bitterblood again to advance the chain.