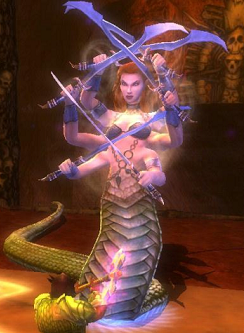 Description: Queen Lailat <The Demon Queen> is the raid boss of the Sands of Menechtarun area, introduced in Module 3. She is encountered in the Court of Lailat and then in the Circle of Eternity.

Note on AI: While on the center platform she will prefer to engage in melee combat, very rarely casting spells. While on the outside platforms she will continuously use spellcasting on 1 target.