The Devourer of Dreams

"Like my ancient giant enemies, you shall be ground into dust! No mere mortal can stop he who devours dreams!" 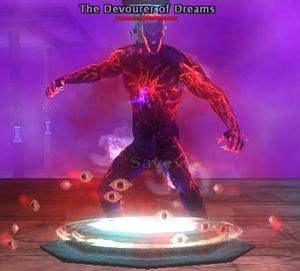 Description: The Devourer of Dreams is the leader of the Circle of Night, an elite organization within the Dreaming Dark. Also known as "The Dreamer", the powerful psionic has the ability to commune with the spirits on Dal Quor without being utterly destroyed or absorbed. These spirits guide the Devourer of Dreams' motives which he then in turn distributes to the other agents of the Dreaming Dark.

Attacking him with effects that deal good-based damage (Deific Vengeance, Holy Smite, Weapon Prefix: Holy, Weapon Suffix: Pure Good, Righteousness) will cause the Devourer of Dreams to go "Vulnerable" for a short period of time. This will negate his regeneration. The rate of regeneration is fairly high, around 100 points every 2 seconds on normal, likely higher on hard/elite.

Motivation of this design likely is to prevent this fight to be solo'ed by casters easily.

They seem to be some sort of Living Spell (Type:Ooze and Race:Violet Slime). They have an anti-healing aura and cast Horrid Wilting

~280 damage on norm, a successful fortitude saving roll will reduce by half and Crushing Despair. So you cannot heal nor repair while they are within a few feet of you. You will need to draw them away from your main group. They are really not too difficult to kill but you can just kite them until the boss dies, they disappear once the fight is over.

"Not even the Stormreaver could injure me as this. What kind of mortal ARE you?!?"