Heart of the Problem 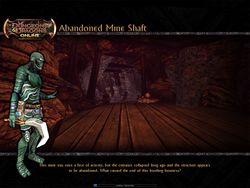 Capstone says he was told to enter the Abandoned Mineshaft to find something old yet new. Go there (in The Cerulean Hills) to investigate his movements.

You start on the western side of the map, and the end fight is in the east. Choose how to get there.

The southern path is shorter but more fiery.

At the control crystal, you have several options for dropping the barrier.