The Cauldron of Sora Katra is the Crafting device for items with the Fusible, Malleable, Fragmented or Battle-Scarred attributes. These items come from quests found in Lordsmarch Plaza. The Cauldron is located in the southwest corner of Lordsmarch Plaza, to the south of the palace entrance. 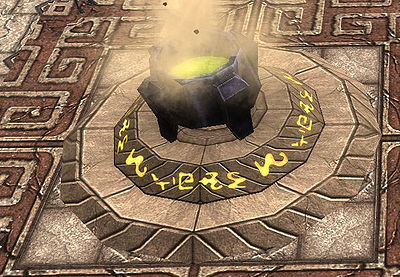 The Crafting window presents a list of all available recipes. If an item is dragged into the lower left field, this list will be reduced to the recipes using that item. Also a Keyword search can be used to find the crafting recipe one desires. 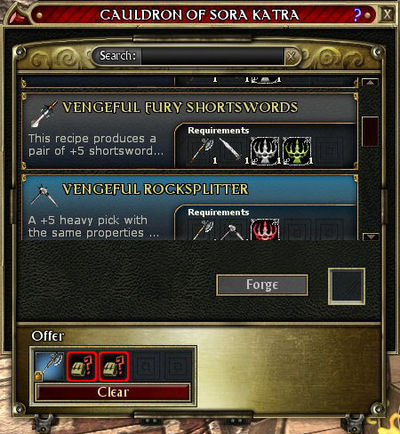 NOTE: Some of the items are not bound and can be found in the Auction House.

(* non-stacking enchantments, such as the Enhancement Bonus and the Spellcasting Implement bonus, are not additive, but nor are they as 2 separate sceptres.)

See Recipe Table, below, for examples and specifics.

The new Scepter of the Ogre Magi can be combined with the Scepter of the Fleshweaver and a Mark of Tzaryan Rrac to make the new Master Transmuter's Staff.

The Wrath of Sora Kell set items from Update 7 start out with the Battle-Scarred attribute. Combining one item with 2 Marks as listed will restore the item to a more powerful version.