Traps are obstacles in the dungeons and wilderness areas, either directly placed by the quest designer, or generated in a random location that can damage or kill an unwary adventurer unless disabled or carefully bypassed.

A trap can be either mechanical or magic in nature.

Different class abilities and different skill levels may trigger different warnings when a character is approaching a trap.

Note that Secret doors do not have any similar DC limitation and anyone with high enough Spot or Search can detect these as usual.

With quest foreknowledge, characters can run/tumble through many traps before they fire or jump around them. Many traps can be also timed, i.e. they trigger in a pattern and with careful timing you can bypass them.

Characters who find themselves in a trap are often allowed a saving throw to avoid or mitigate the damage.

Spell wards can be disarmed from large distances

Spell Ward is a magic trap added with Update 14. Originally they could only be found in Forgotten Realms quests and wilderness areas; since, they have appeared in a couple of other quests. Just like normal traps, spell wards can be detected via Spot, located via Search, and disabled via Disable Device. Unlike normal traps:

Diff basic types of wards can be identified by their color: 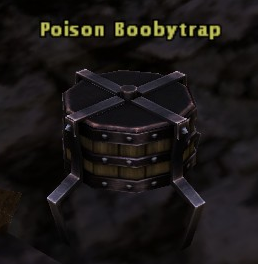 Poison boobytrap waiting to be stepped on

Booby traps are favored by NPC rogues, for example in Wheloon area. Enemy rogues like to set them up at their feet, so that when you approach them, the trap explodes into your face. If you don't trigger them, booby traps can be disabled and may (in rare cases) add to your number of disabled traps.

Bear traps are non-magic traps introduced with the expansion into Forgotten Realms. Characters caught into a bear trap are hurt and held in spot (Reflex and/or Strength check negates). Just like Spell Ward traps, Bear traps have no control panels and you must select the traps directly to disable them. Rolling a 'Critical Failure' when trying to disarm them; sets off the trap's jaws. If you stand far enough back when disarming; it's unlikely to trap you, even on a failed disable attempt. Unlike with "Critically Failed"; blown control boxes; 'Critical Failure' rolls for Bear traps doesn't prevent further disarm attempts (the trap functions until disabled).

Since Update 55, most bear traps trigger only once.