This crude river fort is the base for the Grul orc tribe's recent attacks on Stormreach. 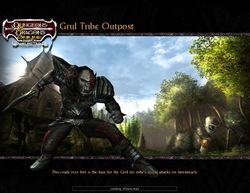 Orcs from the Grul tribe have taken Lady Azdel and her bodyguards captive. Travel to the Grul tribe outpost to the east of the Cerulean Hills and free the captives.

Notes: The insidious cunning bonus is unobtainable due to the required kill of Gravnok.