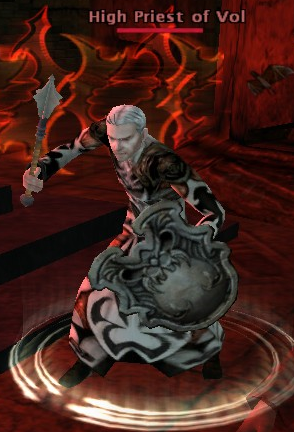 Habitat: Litany of the Dead


Description: High Priest of Vol is a Lawful Evil Vampire that is on of the four guardians of the Black Abbot. He is accessed from the dragons chamber in Litany of the Dead by answering the questions as follows:

Defeating High Priest of Vol can be made easier with the assistance of Golem Gem, which is obtained from the work table in the black dragon's chamber in Litany of the Dead after you have successfully defeated Mentau. (Emphasis on the "can" here - the golem is extremely unreliable, turning on you if it can't see the high priest, and its damage is pretty feeble anyway.)

Completing the High Priest of Vol wing of Litany of the Dead makes the Eye of Vol Trinket available for use in defeating Cholthulzz on the work table in the black dragon's chamber.

Description: He will order his honor guard to attack you.