The temple has been turned into a conduit for Xoriat to enter the Material Plane. Orbs of pure madness roam the hallways, punishing all who touch them.

Chulkash, an aspirant druid of the Gatekeepers, seeks to decipher an ancient prophecy written in the mad language of the daelkyr. The key to this prophecy is the Xorian Cipher, an artifact held by the cultists of Xoriat in a ruined temple. Find the temple, retrieve the Xoriat Cipher, and destroy whatever plans the Xoriat cultists have set into motion. 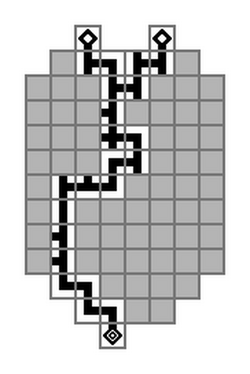 The Xorian Cipher puzzle
Spoiler Warning: Information below this point can be considered spoiler material!

You can get some pretty good rare drops in this quest such as: the Chaosgarde bracers and the Planar Gird.

Inside this quest, a lot of chaos orbs are moving around. Spawning of balls can be stopped by deactivating runes nearby. You need to deactivate the runes with Intelligence of 20–24, Wisdom of 20–22, and Charisma of 20.

You will also want a rogue with good trap skills for this quest (Trap DCs). Anytime you have one of the three keys, you can unlock a corresponding treasure chest in the treasure room. However, all the chests are trapped: one trap (and control panel) on the east chest, and two traps (and control panels) on each of the north and south chests.

There is one – and only one – Shrine inside the whole quest. Whether or not your group can reach this shrine is a crucial part of your adventure here.

In the first large room, there is an altar that is in front of the portal. If Turn Undead is used near said altar, all undead in the room will be subjected to turn undead.

Once everyone has crossed the pressure-activated door locks on both sides, the way-blocks will reappear again and will NOT disappear until the puzzle is solved. This means if the puzzle can't get done, no one can get to the shrine and no one can get out. So despite the side with the named skeletons is seemingly more dangerous, the puzzle room is actually the real fight. A 4-2 split (4 people for the puzzle room, 2 stay in the bottom) is recommended for Elite and/or Hard. Also, there is an INT rune inside the puzzle room.

The North-east room (marked with a collapsible floor on the map), is protected by a Locked Door, a Rogue can attempt to pick the lock. Alternatively you may "bash down" the door: 20 Strength (19:Fail; 20:Success), or a thrown weapon would work – without the need to reach 20 Strength. Inside it has a collapsing floor and a gate that closes permanently when the floor does collapse. Stay to the left when entering the room and wait for everyone to enter, or you risk losing the treasure chest here. Killing the scorpion opens the barrier to a room with a chest containing the Green Key.