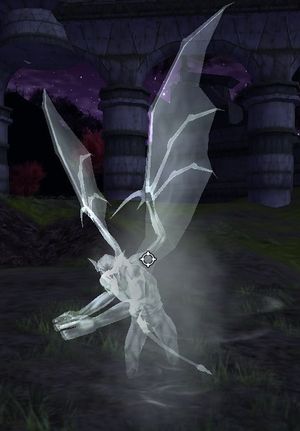 
Special Qualities: Fast Healing, Airborne, Invisibility, Stealth, Extraplanar, Chance to summon another Air Mephit when spawned (unless it was summoned itself), Chance to summon another Air Mephit at death (whether it was summoned or not), DR ♦5Normal ♥5Hard ♠10Elite/Magic OR Summoned by another mephit: DR ♦5Normal ♥5Hard ♠5Elite/Magic

Description: The most basic kind of Air Mephit. When it is summoned by another mephit, kills don't count for the Monster Manual or for the experience report.


Description: The most basic kind of Air Mephit.