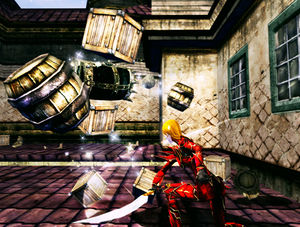 
Description: As you smash him up and reduce his hitpoints, his crates get smashed off one by one quite amusingly.
HP: Normal: 500, Epic Elite: ~130,000

His name is a play on the name of the character Kratos - from the popular God of War series on the playstation. Only this Crateos is the god of boxes, instead of god of war.