The scoundrel's Run is more than a race, and many who compete win death for their efforts. Dare you accept this challenge?

To get to Smuggler's Run labyrinth, take the road out of camp. Use the left fork, proceed past the waterfall, and go through the northern mountain pass. The entrance is hidden in a forest west of a lagoon. You must recover all five pieces of Halokh hidden inside. 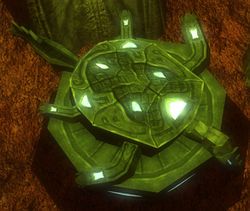 The completed Idol of Halokh

Walkthrough:
In this walk-through, you're going to hold all 5 pieces until the end. You could run back and place individual pieces on the altar (and use the only shrine in the quest) and then return to your last location, below, but it's not nearly as fast.