Dozens of people have vanished mysteriously from this quiet neighborhood near the Harbor during the last few days. 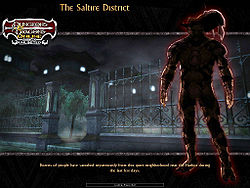 Godwick Spurge, a reporter for the Stormreach Chronicle, is writing a story on the mysterious disappearances that have been happening in the Saltire District. He wants you to help him investigate.

The entrance to the Saltire District is in the Harbor, under the north–south suspension bridge, to the west from Waterworks entrance.

Both traps can be easily timed.

Notes: Onslaught & Conquest are possible, but not worth it: