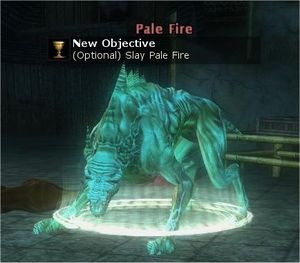 Habitat: Missing — Between the second and third evidence


Description: Pale Fire buffs himself with an intermittent Fire Shield (Cold) once his HP get low enough. Resist cold 30 is not enough to negate. Don't melee him while his shield is up.

It is possible to get the second evidence, backtrack to the start (or use Dimension Door), cross the underwater tunnel, and get the third evidence without fighting him.