Reporters for the Stormreach Chronicle believe that Morley Blode, proprietor of this shop, is the one responsible for creating the Taken. 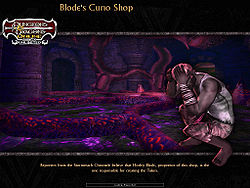 Felicity Mallow, a reporter for the Stormreach Chronicle, has a tip on where the Taken creatures come from. According to her sources, a man named Morley Blode is connected with creating the Taken.

Enter Blode's Curio Shop. in the Harbor and try to learn how the Taken are made.