Neighbors report horrible noises issuing from this oddly-named warehouse. The Stormreach Chronicle wants you to investigate. 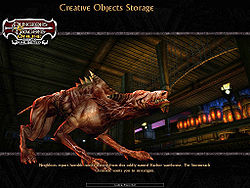 Chronicle worker Parker Pipewort is writing a story on the Taken creatures that recently appeared in Stormreach. He's made a connection between the creatures and a warehouse in the Harbor, and he wants you to investigate.

Enter the 'Creative Objects Storage' in the Harbor and find out what's going on.

Notes: Breakables can be targeted only after certain rounds and no breakable bonus is possible. Conquest is automatic.