From DDO wiki
(Redirected from Ruins of Gianthold (Epic))
Jump to: navigation, search

Frozen crystals, lava, and upturned rock formations still reveal the devastation caused by the ancient war between the giants and the dragons. 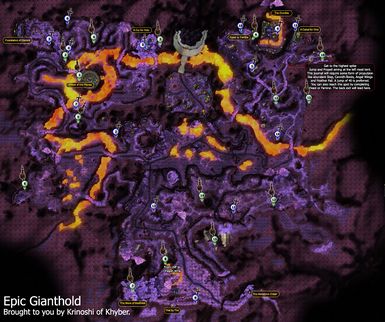 Spoilers!
The various details of the Epic map are different than on the Heroic version.

The farshifter in Gianthold, Narkonk, can teleport you to the Heroic/Epic version of three faction locations: Storm's Eye (far west), Storm's Heart (south-central), or Storm's Fist (far east), shown in aqua on the Heroic Gianthold map. This can save a lot of running time when getting to far away quests.

Three of the quests in this zone are given by NPCs located within the Gianthold city area:

Return to Prison of the Planes[edit]

Return to Cabal for One[edit]

The quests located within the wilderness area are:

Bonus for solving all encounters: 8,100 XP

Words of the Ancient Ones[edit] 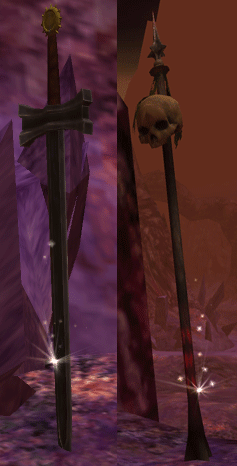 Stormreaver's musings appear as a giant sword; Truthful One's teachings as a spear with a skull