The King's Forest was once kept clear of bandits, poachers, and all manner of unsavory creatures. But with the Purple Knights and War Wizards desperately fending off the Drow onslaught, the forest is now a dangerous place. 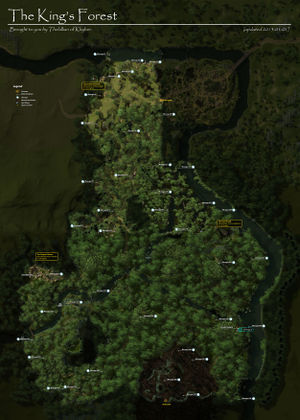 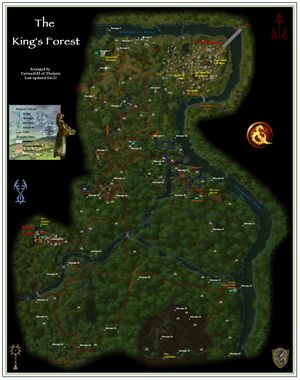 This adventure zone is accessed through Eveningstar and The Underdark. The King's Forest is a level 21 Wilderness Adventure Area, allowing characters from levels 20 to 25 to get full experience.

Once you talk to Milus Sherton in the Purple Dragon Knight forward outpost, you can talk to him in Eveningstar to be sent there anytime.

Unlike most explorer zones, the King's Forest has scattered Bear Traps and false floors (Pit Covers). They are randomly located and can be disabled as any normal traps.

Note: If you complete all of a faction's encounters, the faction member near the faction trader will offer you a standard quest reward list, as well as the bonus XP gained from completing all the encounters.

Druids of the King's Forest[edit]

Elminster has left 40 messages for players to find. These are rumored to help defeat Lolth. Each Message is worth 1800 XP. Collecting all 40 earns a bonus of 18000 XP and clears the fog of war for the entire map.

Killing native fauna here does not add to your slayer count (but it does draw the wrath of Dryads).