Description: Ana Brabener appears in the Menace of the Underdark storyline. Many players refer to this mechanic as a female version of Coyle Lovell.

After completing Beyond the Rift, if you look around the Eveningstar Cavern entrance while still on heroic levels, you can see Ana, Torin and Cormul talking about the Thread of the Weave and how they plan to search for it themselves. 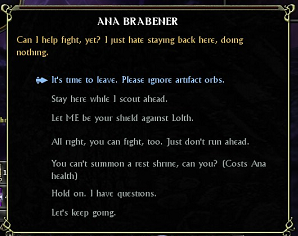 need to be added: screenshot, her stats and attack, shrine spawn mechanic and how to manipulate her via conversation dialog