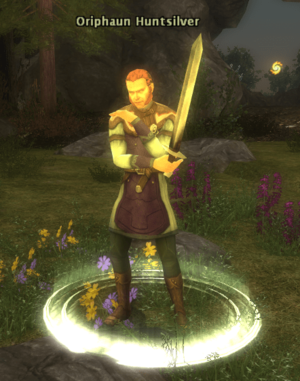 Description: Oriphaun is noble, a member of House Huntsilver. He's also been an avid collector of rare relics and artifacts his entire life. He also becomes a Harper.

Notes: Oriphaun was first introduced with Shadowfell Conspiracy expansion. However, he was mentioned again in The High Road of Shadows adventure pack. Chronologically, it seems that the first mention of Oriphaun is in the High Road story (level 18) where Oriphaun, a Harper in training, has scattered a Nether Scroll's pieces all over High Road. You find the Nether Scroll, but don't find Oriphaun. In the Shadow Over Wheloon storyline (level 16), Oriphaun tries to retrieve a Nether Scroll that enables the Netherese to control the Shadowfell effect. He ends up getting captured and you free him at the end fight of Through a Mirror Darkly, while discovering that the Nethereese are planning to invade Cormyr using the Storm Horns. Starting The Secret of the Storm Horns storyline (level 19), you learn that Oriphaun has been tracking the Netherese in the Storm Horns. He is taken captive at the start of Tracker's Trap and you find him again in What Goes Up, where he helps you get to the Mythallar chamber.