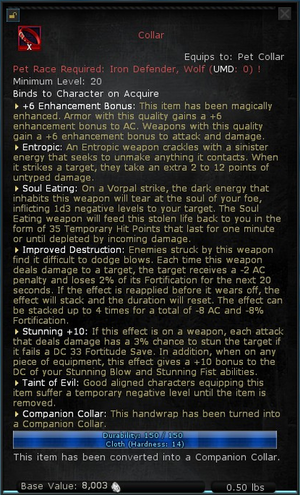 A set of Grave Wrappings after conversion to a Collar.

Random loot collars can be selected as quest rewards (if Quest End Rewards Based on Class is enabled in Options->Gameplay and your character is an Artificer or Druid).

You can also convert random loot and Named Handwraps at a Device Workstation using Mechanical Trap Parts or Cannith Essences.

Gear equipped by your companion never takes any damage.

Any set of handwraps, whether random loot, Named or Crafted can be converted into a Collar at a Device Workstation. The Trapmaking Feat is not required to convert handwraps into a collar.

There are different recipes, some requiring an amount of trap parts that increases based on the total enhancement bonus of the handwraps.

There is an alternative recipe, that works on any set of handwraps, that uses 10 Cannith Essences, which is useful if you cannot get hold of the required trap parts. 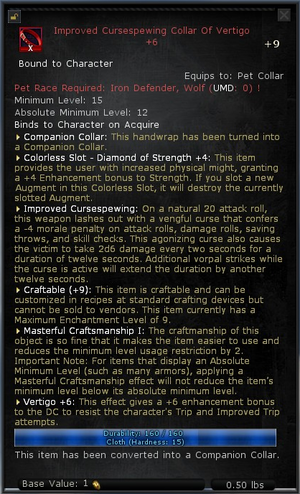 An example of a set of Cannith crafted handwraps that has been converted to a Collar.

Cannith Crafting does not by itself allow for the crafting of Collars - Collars are uncraftable. However, a set of Cannith crafted handwraps can be converted into an identical Collar at a Device Workstation.

For Collars with Augment slots see Pets and equipment with slots to determine what Augment Crystals work for pets.

Companion collars do work with some rubies. Tested Frost, Fire and Acid all work.