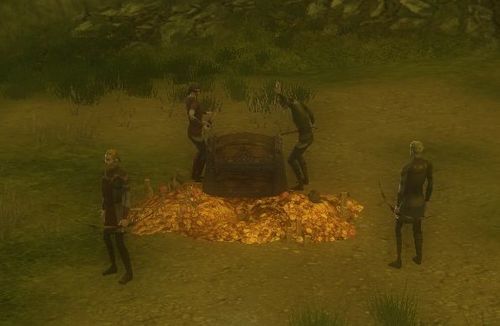 A random encounter in The King's Forest. You approach two parties around a chest and a pile of gold. They successfully raided a drow camp, and are discussing how to divide the loot. Both parties have their reasons, and you should help dealing with this.

Mediate between adventurers (led by Jonabas Foreman) and bandits (led by Devian Trell) over who should get some treasure. You have two chances to convince the other party to give up on their loot. If you succeed once, you complete the encounter.

If you fail to convince the other party, the encounter still ends in a success, but you don't get the chest as a reward.

Sometimes the party leaders will be sneaking, and are untargetable to talk, unless you have enough Spot to see them.