Named monsters are often designated by the color of their name as shown during a quest, which will differ from the typical blue-white names of monsters in a mob.

Named monsters often have greater than average hit points than the mobs that accompany them.

Here are general characteristics of named monsters by color type.

Yellow named is generally used to denote a special, but not particularly dangerous foe. Although basic monsters' overhead names are also colored yellow, you can tell the difference in an actually -Named- Foe by the fact that their name will ALWAYS appear above their head, even when not targeted, compared to regular monsters which will only display their name above their heads when targeted. Yellow named enemies are very rare and generally only used for special objects like crystals, or foes which start as NPCs. Orange is far more commonly used for named foes.

They have no blanket immunities, but are generally at least a tiny bit tougher then their non-named counterparts.

Most NPCs you can recruit onto your side in quests are considered yellow-named. A small number of these enemies are more powerful and possesses traits similar to orange- or red-named monsters. 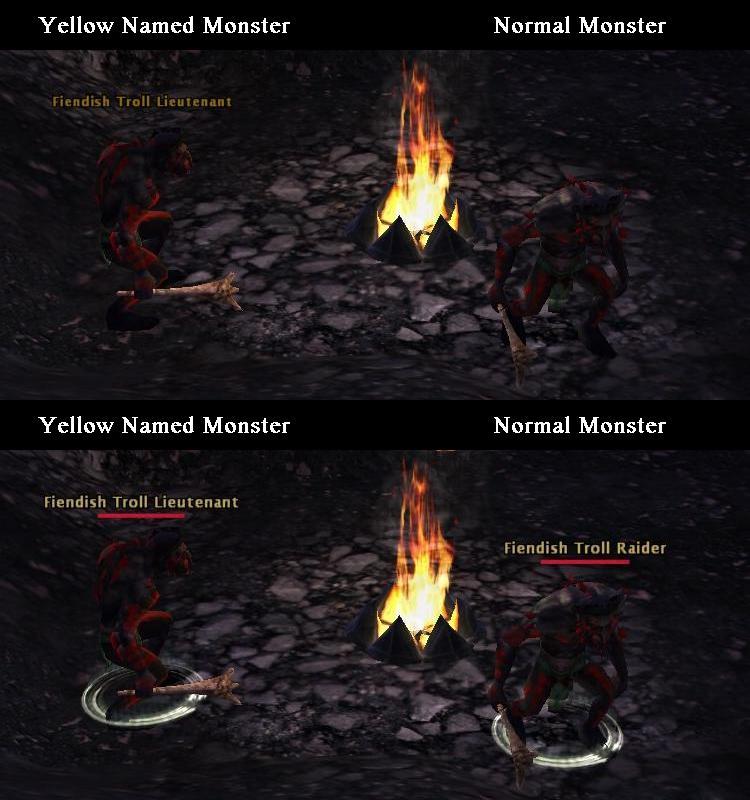 Orange named is generally used to denote a more powerful foe when compared to a standard non-named or yellow named foe of the same type. While they generally possess no additional immunities (*), they can still pose a major threat. Orange-named enemies can appear in large groups, unlike their more powerful counterparts. Nearly every quest in the game feature at least one if not multiple orange named enemies.

(*) Note: There are a few exceptions to the lack of immunities:

Red named monsters are quite powerful and often can't be beaten by a single player character by themselves if the player character matches or is less than the quest's level difficulty. Most quests feature at least one red-named enemy, generally the end boss.

One notable monster, General Xanti'lar, the boss of Stormcleave Outpost, is a quintessential example of the power of a red-named monster, complete with challenging damage reduction and immunities which can and often need to be disabled in order to defeat him.

Purple named monsters are rarer and pretty much always considered bosses. They are found primarily in raids, such as the Hound of Xoriat or The Reaver's Bane, as well as some other challenging quests which require flagging.