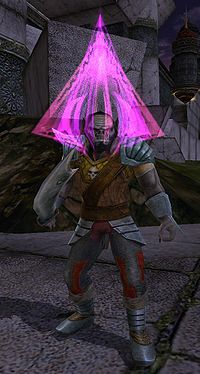 Charms an enemy humanoid, which then fights as an ally. Charmed humanoids get an additional saving throw every 3d6+12 seconds.

Humanoids include kobolds, goblinoids, player races except for warforged. Does not include troglodytes and monstrous humanoids.

A successful Will save negates this effect.

The humanoid cannot be attacked by players for the duration of the spell.

Charmed humanoids will attack hostile creatures in their vicinity. A charmed humanoid remains stationary if there are no enemies nearby. It will not follow the caster. The humanoid remains charmed until: 1) It succeeds on a Will save, 2) It dies, 3) The caster uses Dismiss Charm on it, or 4) The caster leaves the quest instance. (No one but the caster can use Dismiss Charm to release a humanoid that they have charmed.)

Equivalent spells are available to charm monsters, or the undead, or oozes. Red named are immune to charm spells. Some orange named bosses are also immune to them.