Sneaking is the ability to progress without detection past one or more enemies.

Update 19 has revised the entire stealth system for players and attackers.

Jumping and tumbling while in stealth is now possible, at a −20 penalty to Jump and Tumble skills. If any of these skills are brought to negative scores while in Sneak, they are disabled for the player.

With these Update 19 changes, abilities of the Shadowdancer epic destiny and the Ranger class were revised.

The more eyes they get, larger the bonus they receive to Spot you.

The Hide skill works against the enemy's Spot check. The higher the Hide, the less likely you will be immediately detected as you get closer to an enemy. However, the new system makes the enemies far more vigilant.

When a stealthed player enters a line-of-sight of the enemy, the Spot check instantly begins. The player will see a series of flashing Spot detection symbols above an enemy's head, changing in color up to three states of eye symbols as the enemy's Spot bonuses increase. The closer the player or the weaker their Hide skill, the more active the "pinging", until the player moves out of the enemy's visual arc or until the enemy's Spot exceeds the player's Hide skill, and has detected the player. The further away the player, the less likely that the Spot condition may change or activate.

Prior to Update 19, the player might see one to three "eye" symbols over their character. In the new system, you'll see only a single eye over your character only when you are in line-of-sight of an enemy (their Spot check is active). If you have an eye over your character while in stealth, you should note quickly how far you are from an enemy (they could be approaching and also hidden), taking cover immediately if required to escape detection.

The Move Silently skill works as before, against the enemy's Listen check. The sensitivity of this check is greater. Breaking objects, the sounds of summoned creatures, or footfalls will instantly get the attention of enemies who are nearby. Enemies who hear something will show a large red question mark over their heads and immediately go to investigate the sound. Using levers, switches and opening doors generally do not make sounds in terms of stealth gameplay.

Red footfalls on a player indicate that something has sensed and is tracking you audibly. This is typical when spiders detect you, using tremor-sense, and oozes. The deeper and redder the red footfalls, the more enemies have found and can hear you.

White footfalls suggest that an enemy is nearby and may soon hear your approach (your Move Silently score is failing). 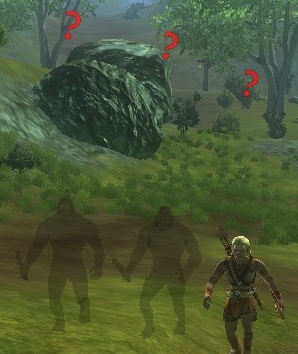 When a red question mark appears over their head, they have heard something and are going to investigate.

As stated, an enemy's Spot and Listen check is always active.

Enemies walk or run realistically to something suspicious and do not "slide" to you if detected as before Update 19.

An enemy that knows your position while stealthed will show a large red eye over their head. They might have targeted you by sound or sight.

If a player is detected, it is now possible to escape from a pursuer if the player can

Even an enemy with a red-eye might not know your precise location but will home in quickly to where you were initially found. If you are still stealthed and invisible, you may still be able to get away if you can sneak fast enough out of the enemy's Spot and Listen range. If you can do so, the enemy will still search for a time, but blindly.

Enemies that are moving and searching for you, while often attacking blindly to fish you out, don't get bonuses to Spot or Listen while in pursuit.

A stealthy player can move away from searching enemies with a good Move Silently skill.

After a time, the enemies will stop their search. Depending on the AI, they may return to their original location or remain in place where they halted the search.

If an enemy hears or sees something new, they will resume their search. If they aren't moving, the enemy regains their Spot bonuses.

Invisibility works truly as being immune to Spot unless you are too close to the enemy (within 2 meters, or a human player's body length). When invisibility is broken, the enemy may instantly spot you if they are facing you.

Invisibility does not make a player soundless. A non-stealthy player has a Move Silently score of 0. If enemies hear footfalls, they will investigate, and will find a loud, invisible player once close enough to see them. Sounds from any summons (even if they seem to float), breakables or levers could also attract enemies to invisible players.

Invisibility guards that activate while at close range may not help if you were already within 2 meters of the enemy and are likely moving loud enough for enemies to hear you at such close proximity.

Pale Masters in Wraith/Shadow forms and Shadowdancers in Shadow Form, while they appear to float, still make footfalls for the purposes of detection. 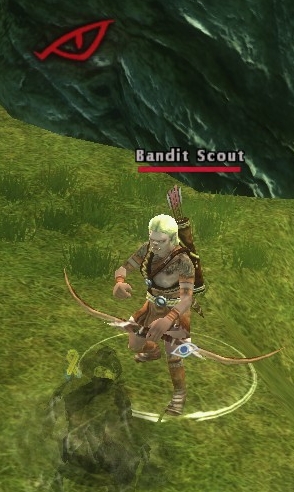 A red eye indicates that the enemy found you.

Stealth cannot work against enemies with

While stealth still works well against beholders, the monster's 360-degree Spot search with the bonus (being a giant, multi-eyed ball) means that a stealthy player has to move faster than before to attack.

Again, any enemy is likely to detect you with stealth, invisibility or both if you are closer to 2 meters (one body length) from the enemy, aren't silent, or within the enemy's visual line-of-sight.

While Bard, Ranger, Monk and Rogue classes have Hide and Move Silently as class skills, it is not impossible to add additional stealth to many classes with some limits.

The following creatures have been confirmed to be capable of sneaking (there might be more – research continues – be on your guard). To detect these enemies faster and farther away, increase your own Spot skill with action points, feats, enhancements and items. It's often beneficial to wear your high-Spot items while in Sneak.