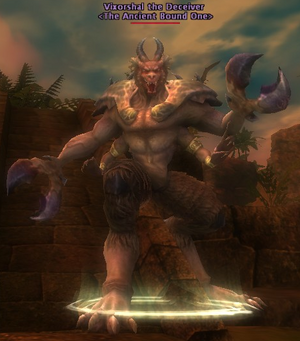 
Description: Technically not rare, as he always appears if two crests in the nearby region are slotted into his ziggurat. On epic, his chest contains Black Pearls and a random Dinosaur Bone weapon.

While Vixorshal is a tough opponent with a huge amount of hit points and some brutal attacks, he can easily be exploited by a character that happens to be immune to Horrid Wilting (Warforged or Pale Masters.) Due to a quirk in his AI, Vixorshal will never pursue opponents in spellcasting range, even if Horrid Wilting fails to affect them - and this is the only spell he knows. This allows such players to attack him with ranged weapons or spells with no fear of retaliation.