Come Out and Slay

The Sharn Syndicate's headquarters in Stormreach is an opulent mansion hidden in the gang-infested alleyways of the Tenements. 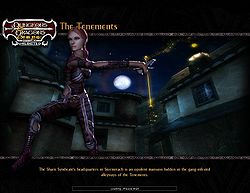 Madhand Mulvaney told you that the Sharn Syndicate has set up a meeting to unite all the gangs of Stormreach. He wants you to infiltrate this meeting and assassinate the Syndicate representative.

Madhand is found in the North West section of the Marketplace map, East and slightly North of the House Phiarlan entrance. His symbol won't be visible on your map, but travel to that area and you'll see him leaning up against a pillar. He now is visible on the Map.

This meeting will take place at the Tenements, located in the Stormreach Marketplace.