The Stormreach Guard often bring the charge of money-laundering against those who fail to pay the Guard their due. 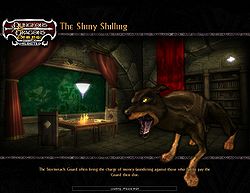 Guard Kayd told you that the Shiny Shilling is a money laundering front for the Sharn Syndicate. The Stormreach Guard won't act directly, but Guard Kayd wants you to go in and deal with any illicit activities inside the Shiny Shilling. Kayd can be found near the Hall of Heroes, underneath the west bridge that travels from the market square to the bank.