The Sharn Syndicate has no qualms about victimizing the downtrodden and the weak of Stromreach society. 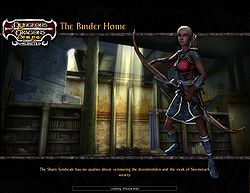 You met Olistair Binder, who is being forced to give the Sharn Syndicate his life savings in order to release his captive family. But, Olistair would rather pay you to rescue his family than trust the Syndicate to release them or the Stormreach Guard to rescue them.

Go to the Binder Home in the Stormreach Marketplace and rescue Binder's Family.