House Kundarak pays the Stormreach Guard to respond to emergencies at Lordsmarch Bank. Some question the wisdom of this, given the city guard's dubious reputation. 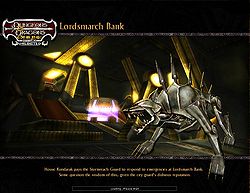 Burgundy Tir asked you to protect a fresco fragment while his agent withdraws it from a deposit box.

You are to meet the agent, Zircon, at the Lordsmarch Bank's side-entrance.