As your character advances in epic experience and level, it gains Destiny Points (aka DP) which you can spend in epic destiny trees. Similar to heroic enhancements, epic destinies offer a huge variety of options to face the challenges at levels 20+.

Epic Destinies (ED) were introduced in Update 14 (as the progression system for epic levels) and overhauled in Update 51 (preparing for the introduction of legendary levels). If you were familiar with the old system, see here.

Epic destinies are available for free. If you purchased ED before Update 51, you receive a compensation.

To modify your destinies, talk to the epic trainer, Fatespinner, or select Epic Destinies from the main menu. You can also assign a keyboard shortcut to access your EDs.

To drag your ED active abilities to hotbar, find them on your Character Sheet.

When reaching epic levels for the first time, you are directed to the Fatespinner and a new public area called Junction of the Spheres, accessible from her dialog. This area contains NPCs that correspond to each destiny. Speak to those NPCs to unlock the destiny for this character permanently. This NPC will give you a description of the play styles that the tree supports, as well as serve a small part in a new, lightweight tutorial. You only need to do it once per character.

ED trees are grouped in 4 spheres:

Your character gains 4 Destiny Points per level. You can receive additional DP from various sources, such as past lives or rare magical tomes.

Destiny Points from Past Lives[edit]

Note that 48 past lives will contribute 16 Fate Points, but only 15 of these can be converted into Epic DP. The remaining point can be combined with a Tome of Fate +2 for an additional DP.

More concisely, since the above table confused me for like... 5 minutes:

You can spend DP in up to three ED trees simultaneously. All characters can choose from the full set of epic trees, regardless of your heroic race or class.

Stacking
The abilities in different trees usually stack, with the exception of spell DCs in the cores of caster destinies.
Epic mantles
Each ED tree has a mantle ability. While your character can take mantle abilities from different trees, you can have only one mantle active at a time.
Epic strikes
Each ED tree has one or more abilities designated as epic strikes. While your character can take epic strikes from different trees, all strikes share a cooldown.
Epic moments
In Tier 5 of each tree you will find an Epic Moment. Epic Moments are powerful abilities with a long cooldown. They can represent a significant amount of lategame power.

If you were familiar with the ED system before Update 51, this section should help you understand the new system.

As of the release of the Menace of the Underdark expansion pack, DDO is split into two sections:

During Epic leveling, the XP that characters gain is used for 3 purposes:

Earned XP is replicated in each place that uses it, NOT divided between them 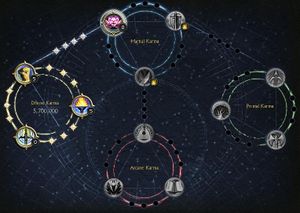 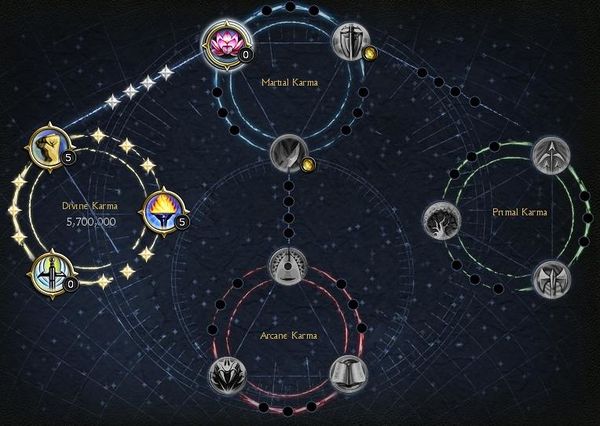 Once chosen, Epic Destinies are independent of the character level:

There are currently twelve Epic Destinies, although more may be added over time.

At level 20 a character can visit a Fatespinner and pick an Epic Destiny on the map UI.

Each Epic Destiny level is divided into 5 ranks:

Characters can gain access to multiple Epic Destinies beyond their initial Destiny: 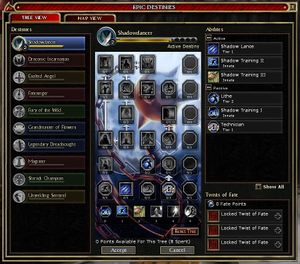 Destiny Manipulation: Tree view. Trees are similar to the Class Enhancement trees, but you may have only one tree active at a time, there's an extra row, and vertical access is gated by Destiny Level 0/1/2/3/4/5 as well as 0/4/8/12/16/20 EDP spent. Granted abilities are purely associated with Destiny Level 0/1/2/3/4/5, and have no EDP prerequisites.

Each Epic Destiny Tree has 6 Innate abilities, which are free (unlike Enhancement Tree cores)

In addition to the Innate Abilities, further abilities can be gained by spending EDP in the 6 tiers within the Destiny:

The Epic Moment itself is an ability chosen from the Epic Destiny tree:

Players are allowed to swap and level Epic Destinies independently of one another. Changing destinies requires you to unlock new destinies or buy the Key of Destiny from the DDO Store for 995

. The key allows you to unlock an adjacent destiny to one you currently have unlocked. Destinies all have a place on the destiny map. Each destiny has at least one adjacent destiny from the same sphere. Some destinies are also adjacent to a destiny in another sphere.

Players can change an Epic Destiny by locating a Fatespinner in public areas. Doing so will suppress their currently active Destiny and switch to another that they have access to. Any advancement in their old Destiny is NOT lost, but they gain no benefits from their old Epic Destiny.

Epic Destiny Points are permanently associated with the Epic Destiny used when earning them. So if you switch to another Epic Destiny, the game automatically shelves points and abilities earned for whatever other Epic Destiny you've chosen, but you can always switch back and retain all progress, across all Epic Destinies. 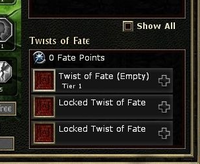 Characters can unlock up to five Twist of Fate slots:

Characters begin with no unlocked slots. They must spend their first Fate Point to unlock the first Twist of Fate slot. After that, you can choose between upgrading unlocked slot(s) or unlocking the next slot.

Fate points are never lost, except the +5 for reaching level 29 and 30.

When character undergoes a True Reincarnation (HR, RR or IR) and their Heroic level drops below 20, Epic advancement and all benefits related to it are suppressed, although existing Epic Destiny progress is saved.

All abilities acquired from Destinies are retained when you HR, RR or IR, but are only active at Epic Levels. These include:

e.g. If a character is a level 20 FvS with 5 levels of Exalted Angel, and reincarnates into a Fighter, they will still be a level 5 Exalted Angel. They will, however, be locked out from using Epic Destiny abilities until they level back up to 20.

After Reincarnation, a character's Destiny Progression continues exactly where it was left in the previous life. Some ED abilities have Character Level prerequisites, meaning they may not be usable until the character reaches level 21, 22, 23 etc., even though they have access to all other earned/selected abilities in the Destiny.

Maintaining your advancement in Epic Destinies is generally a good thing, however it comes with an important caveat - the character may not have access to an appropriate Destiny when they reach level 20 in their next life:

e.g. A character is a Cleric in their first life and chooses to unlock Exalted Angel, and then reincarnates into a Sorcerer and wants to use Draconic Incarnation in Epic levels (as it is aimed mainly towards Sorcerers). When they hit level 20 for the second time, they will still be in the Exalted Angel Epic Destiny, deep in the Divine sphere. They will have to unlock several destinies in order to unlock reach Draconic Incarnation, in the Arcane sphere, the shortest path being:

It is often a good idea to unlock a Destiny needed for the next life prior to Reincarnation, especially if the new class is in a different Sphere. Alternatively, class choice on Reincarnation can be based on the classes for which a relevant Destinies have already been unlocked. Destinies can also be unlocked through purchases in the DDO Store.