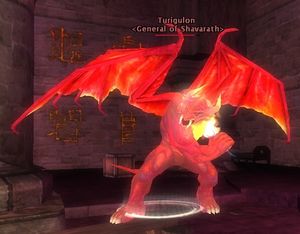 
Description: Turigulon is the end boss of Epic Devil Assault. Bug: On Monster Manual, it adds as a kill of Warlord Hissyasha (Devil Assault's Heroic Normal boss). If you have Troglodyte Mastery, you can see his HP value.

One of the most powerful pit fiends you'll encounter, Turigulon hits hard and fast. He has extremely high hitpoints, armor class (~70) and fairly good saves so it will take some time to defeat him. Beware of the Pit Fiend Super Natural Poison, on a roll save of 1 and failure, your constitution goes to 0 on EE/Reaper and your stunned. You'll be quickly killed if solo. You'll want a good tank to maintain his aggro. However, unlike most Pit Fiends, Turigulon does not have true seeing, so as long as you can keep your tank displaced, he is not too major of a threat. Just beat him down like any other boss and keep your tank alive.