Horoth himself commanded the Legion of the Iron Maw before becoming First General. Those who serve in this Legion are the most loyal and dedicated of Horoth's followers. 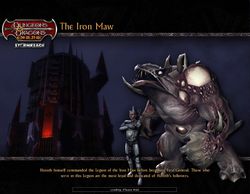 Awan of the Yugoloth tells you that the Devil fortress known as the Iron Maw has never been conquered, despite eons of battle. If it were to fall, the Devils would surely be at each others throats over such a catastrophe. Awan wants you to infiltrate the Iron Maw through a long forgotten passage, and then open its gate to the Demon Horde outside. After the Demons and Devils annihilate each other, you are to eliminate any survivors, thereby preventing the Devils from learning how the Iron Maw fell.

Walkthrough from Shade: Pretty straight forward hack and slash quest. Be sure to have some melee DPS and basic healing. Nothing too hard. No real class recommendations other than some melee, any should work well. The quest has many Unstable Planar Gateways (portals) that spawn monsters; you can destroy them if you like, but that's entirely optional and provides no bonus for doing so.

First level: find the 2 levers to open the South gate. Go through the south gate. Do NOT approach the south gate until the two levers have been found and pulled, as there is a massive spike trap around the gate pressure plate that is not disabled until the two levers are pulled. Upstairs, and find your way to the South-west corner of the map (directly above the entrance) to get to the next level.

Second level: find your way to the South-west corner of the map upstairs to get to the next level (to the right and upstairs from where you first enter).

Third level: pull the levers on either side of the shrine to open the gate, go upstairs, and pull a lever to then proceed to final battle. Make sure all party member go through at the top of the stairs at the same time, a gate will come down and lock others out. Make sure to destroy the portals at this level; if left alive, they may cause white-dotting of bosses in the end fight. DDO Forums [Unverified

"Make sure to destroy the portals at this level; if left alive, they may cause white-dotting of bosses in the end fight. DDO Forums " has not been verified in-game. Please verify it!]

End Fight:
This is a moderately challenging fight against a Horned Devil who can cast reverse gravity. He has several trash mobs which respawn fairly quickly. You can either beat him down quickly, or go for a more complicated approach to get a bonus chest:

As the boss's hit points go down, he will cast reverse gravity at 75%/50%/25% HP remaining. You should have some people in the room, standing below the red triangle shaped banners. These characters can attempt to get up to the platforms above to light the 3 runes. Once the third rune is lit, Erisandes will die instantly and the extra chest will be available after the quest is complete. Make sure to destroy the Unstable Planer Gateways, as the devils spawn, they can toggle the runes.

After Erisandes is dead, the Demons will attack you. This is a moderately difficult fight as the Marilith can hit very hard. However her attacks are infrequent and she can be DPS'd down very fast. Melee, Firewall or Blade Barriers all work fine, just ignore her trash mobs and beat her down quickly. Note that she seems to be immune to Sneak Attack; so rogues will be at a disadvantage. If your group has a caster, hitting the trash mobs with Flesh to Stone can really make the fight easier. Also note the spell Waves of Exhaustion will greatly lower Keradi's movement speed, making her much easier to kite.

It seems the longer the fight goes on the more responsive Keradi becomes (attacking more often), so kill her quickly to ensure victory.

To unlock the "lightning" locked chest in Bastion of Power requires someone to get onto the platform above the chest and "light" the switch located there. To accomplish this you wait for the "Anti-Gravity" effect the boss does and go for it then. (DDO Forums)