From DDO wiki
(Redirected from Marilith)
Jump to: navigation, search 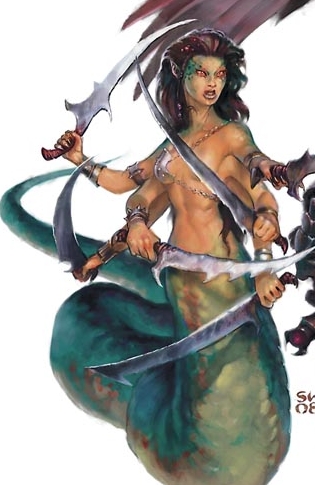 Mariliths are extremely dangerous creatures. They usually wield a khopesh in each of their six hands and wears many bangles and jewels. Most also possess spellcasting abilites and cast very powerful spells such as Blade Barrier.

Mariliths are Evil Outsider type monsters. As all demons, they are always Chaotic Evil.

A marilith stands about 9 feet tall and measures about 20 feet from head to tip of tail. It weighs about 4,000 pounds.

Though mariliths thrive on grand strategy and army-level tactics, they love physical combat and never pass up an opportunity to fight. Each of a marilith’s six arms can wield a weapon, and the creature gets an additional three weapon attacks with its primary arm. Mariliths seldom rush headlong into battle, however, preferring to hang back and size up the situation first. They always seek to gain the best possible advantage from the local terrain, obstacles, and any vulnerability or weakness in their opponents.

Mariliths deal extreme amounts of damage thanks to their ability to attack you with 3 to 6 weapons at a time. Their damage varies greatly depending on which one/what CR you fight: Anywhere from ~5-80 slashing per hit, 3-6 hits per swing animation. They may perform a triple 3-hit swing, for 9 attacks total in rapid succession. Additionally, they use tailwhip for 5-50 bludgeoning damage and knockdown.

Though not all mariliths possess spellcasting, the ones that do usually have at least these spells available at will:
Blade Barrier, Telekinesis, Greater Teleport

Mariliths have continuous use of this ability, functions as the spell.

Part of its natural abilities, a marilith’s Multiweapon Fighting feat allows it to attack with all its arms at no penalty.

A marilith’s natural weapons, as well as any weapons it wields, are treated as chaotic-aligned and evil-aligned for the purpose of overcoming damage reduction.