Nash is afraid of what the orcs will do to his farm, but he's just as worried about his farm dogs. 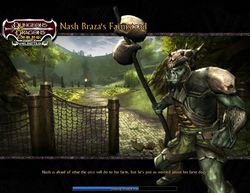 Orcs are preparing to burn Nash Braza's farmstead to the ground. Slay the orcs and prevent Nash's farm from becoming a fiery ruin.
Note: This quest is labeled as a Harbor quest in-game but is actually picked up and turned-in, within The Cerulean Hills.

Notes: The devious and insidious cunning bonuses are unobtainable due to the 15 required kills of the orc ambushers. Also, the aggression and onslaught bonuses are bugged for this quest. There are times when killing an enemy will cause your bonus to go from onslaught to aggression or even aggression to no bonus at all. The numbers listed are only the values where the bonus is guaranteed. You may receive a higher bonus than expected.